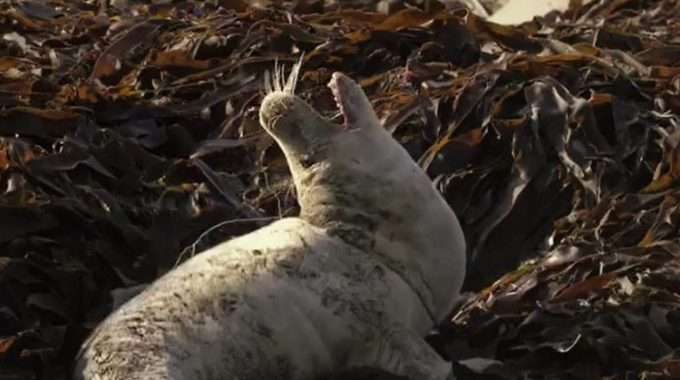 Our 24-hour hotline phone received a rather distressing call on Thursday afternoon, 10 May 2018. The caller spoke in a surprising urgency; Grey seal pupping season had been over for a couple of months now so we weren’t expecting any more to need our help:

“I would like to report a seal on the Saltee Islands which has some fishing line wrapped around its neck.”

Unfortunately, by the time we received the call, there were no more ferries to the island. Transport of a rescued seal is never easy. Often a seal is not in a convenient location (such as on an island), or our seal rescue network volunteers are not available at the time. It can be one of the most stressful feelings knowing a seal pup is in need of rescuing and no local volunteers available, nor would they be until work had finished for the day.

After making contact with Declan bates, ferry orchestrator to Saltee Isalnds, and calling numerous volunteers from near and far, we couldn’t find any immediate solution to lift the pup. A stormy and rainy Friday dawned, the rescue prospects were looking grim.

The waterway between Kilmore Quay and the Saltee Islands is notoriously dangerous, even on a pleasant day, it was looking like we would need to wait out the storm.

Fortunately, Saturday’s seas were still and calm. Having it looking to be a more intricate seal rescue, we sent out two of our resident volunteers Gale and Katy to save our entangled pup.

When they landed on the rocky shore of Great Saltee Island, Declan pointed out the seal’s last known location. However, once they ventured further up the beach, the terrain quickly became slippery and unlevel; rock covered in kelp created another obstacle we had to manoeuvre around. A long and uneven shoreline made the seal search 10x harder with views being impaired with seallike rocks.

Finally, after searching for a while they noticed a slightly odd-looking ‘rock’, followed by faint movement; ‘It’s the seal! They thought’. However, on closer inspection, it appeared to be a perfectly healthy pup, and so their search continued.

Gale and Katy went on to find an entire colony of grey seals, but after observing, through binoculars from a safe distance, they established that none of them had any entanglements. Worry had set in that the injured pup may have gone and we were too late to help.

Our volunteer Katy described her feelings when they headed back towards the boat without finding the entangled seal. “By the time we made it within view of the sandy landing strip I was feeling thoroughly defeated. I was thinking that we had already used up two of the four hours we had, and even if we found the seal soon it was bound to take a long time to capture and carry it back to where we would be leaving from. However, within moments my hopelessness turned to disbelief as who should appear on the exact stretch of sand that we had arrived on but a seal, with a very obvious entanglement around its neck!

Since the rocks were difficult to navigate we had left most of our equipment on that one stretch of beach, and the seal had paused to sniff our equipment with uncertainty. The irony of the situation struck Gale and I and we both started laughing. Here we were, observing from a distance as an injured seal sniffed at the very equipment we needed to catch it! The seal had emerged from the water so it was obvious that it was mobile enough to swim and make a quick getaway if frightened, and once in the water, it would be impossible to capture. We knew that we would have one shot.”

Since the seal was still quite close to the water, it was going to be tricky to get him without frightening him away. Luckily our volunteer Gale has extensive experience capturing anything from common seals to huge adult sea lions, as she used to volunteer at the Marine Mammal Centre in San Francisco. With extreme caution, she began to painstakingly sneak up on the seal, trying to situate herself in the small area between the seal and the water. Katy, observing from a safe distance, described her approach as “almost comical as she walked doubled over only a few steps at a time, then crouched down and stayed still when the seal looked at her. Only when it resumed scratching itself would she dare to take a few more steps”. Once she was close enough, Gale stepped swiftly behind the seal, unrolling a towel to create a barrier between the pup and the water. Katy then hurried down to them as the seal snarled at this sudden threat. Using another towel, Katy safely restrained the seal (Serious warning: please do not try this yourself! Seals have a nasty bite and should only be caught by trained volunteers. Call us if you find a seal in need of help.).

After allowing the seal to calm down, Gale gave him some subcutaneous fluids from the drip set to make sure that it was thoroughly hydrated for the return journey. They covered the cage with blankets and poured seawater over it to keep it cool in the sun. Transitioning the cage onto the boat was challenging, but thankfully, the other ferry passengers were eager to help! On arrival back to the mainland they took the seal directly to Gorey Veterinary Practice, so the net could be removed right away. The wonderful Dr. Vaughan, (who comes every few weeks to give her professional opinion on our seals) sedated the seal and then cut away the netting. Thankfully, it had not yet cut into the muscle which means a faster recovery. She cleaned the wound and we returned to our Courtown Seal Rescue Centre to settle the new arrival in. Later that evening we decided to name him Maui, for the demi-god in the Disney movie Moana.

Within days Maui was eating fish on his own and the fluid retention in his head and neck has gone down significantly with the removal of the entanglement. We were able to release Maui back into the wild after a few months rehabilitating in our care.

It is very important not to forget how lucky Maui is. If the finder had not spotted him and notified us of him quickly, or if the weather had not been good for the boat to cross then his story could have turned out very differently.

Entanglement is a huge and growing threat facing marine life, but it is also a threat that everybody can help to minimize. Protecting our oceans can be as simple as refusing to buy products which have a lot of plastic on them or recycling whenever possible.

You can also help us by providing services (like the wonderful Declan Bates and his boat) or by becoming a member of our Seal Rescue Netwotk. We have regular training and recruiting sessions around the country, so keep an eye on our Facebook page to see if there is an event near you soon.

If you enjoyed reading about Maui’s rescue, you can also watch a short video of it on our YouTube channel here: https://www.youtube.com/watch?v=F1sxSproTOo&feature=youtu.be

Begining in 2019, we invited 300 members of the community to join us to plant…

Why are we seeing more dead seals?

This month, we be were busy raising the alarm about the huge rise in dead seals washing up and being reported across Ireland’s coastlines.

n 2020 SRI recorded a total of 202 dead seal reports, nearly DOUBLE that of 2019! And the trend continues: so far 2021 is starting off strong, with double the numbers reported from this time in 2020