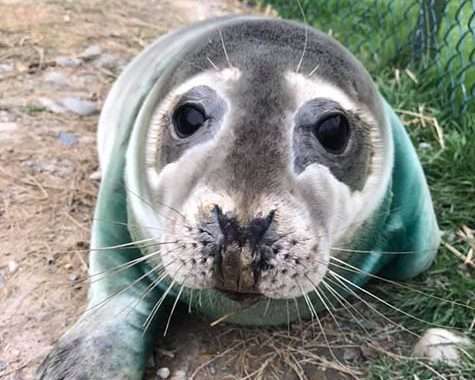 On a recent trip, I stumbled across Seal Rescue Ireland, a national charity that rescues and rehabilitates sick, injured and orphaned seal pups and inspires ocean conservation. It’s located in Courtown, Co Wexford.

According to the visitor signs displayed by the kennels, when a seal is first admitted to Seal Rescue Ireland, they are placed into an off display Intensive Care Unit. This is like the behind the scenes where staff carry out treatment on the seals. Once the pup is healthy enough for a larger space, they are moved into the kennels we the public can see.

The kennels are furnished with rubber mats for comfort, a heating source for warmth and a bath for the pups to swim and eat in. They are fed Irish Herring, a fish with high oil content.

The seals found at the centre are admitted for various reasons but some of the most common include: orphaned, concussion, pneumonia and dehydration.

A seal is released back into the ocean once they have reached release weight and display independent behaviour in the pools which can also be found to the left of the kennels. Rescuers, adopters and valued SRI members have the incredible opportunity to experience the Courtown seal release. The seals are released at 35-40kg whilst common seals are released at 25-30kg.

So how can you help the centre?

After visiting the centre, I wanted to learn a little more about the wonderful work the staff do day in and day out. So I would like to thank Melanie, a member of Seal Rescue Ireland, for agreeing to this short interview.

Q1. How many stranded seal calls did you receive in 2019?

Q2. What do you think is the biggest threat to marine life?

M: The main threats to marine life are unsustainable fishing practices leading to biodiversity loss, climate change leading to severe storms, and pollution which can cause illnesses, entanglements and death. For seals, in particular, they are affected by climate change causing an increase in frequency of severe storms which makes survival very difficult for young inexperienced pups who get injured, exhausted, separated from their mothers, and can drown.

Between sea level rise, and coastal erosion (in particular, on the east coast of Ireland where SRI’s facility is located) seals have fewer and fewer safe “haul-out sites” on coastlines where they can rest above the dangerous crashing waves.

Additionally, humans spend a great deal of time on beaches where seals must be able to rest, rear their young and moult, undisturbed. One of the most preventable but frequent threats to seals is direct disturbance from humans as well as dog attacks. This is why such a large part of SRI’s work is dedicated to spreading awareness and educating the public on giving wildlife space to prevent issues in the first place.

Q3. Who is the most recent seal you have rehabilitated?

M: We currently have 44 seals in care that are in the midst of the rehabilitation process. Last weekend we released 4 seals that had been determined healthy and strong enough to return to the wild. One of these seals was named Pine, and he was rescued due to an entanglement of fishing net that had been improperly disposed of. He was otherwise a healthy individual and had he not encountered the fishing net, human intervention would not have been required. Entanglements are extremely dangerous to all marine animals, however, seal pups are particularly vulnerable as they are inquisitive and will investigate things floating at sea which can lead to trouble.

Additionally, they grow very quickly and as plastic fishing gear does not stretch or break, it becomes deeply embedded in their flesh as they grow, which will ultimately lead to strangulation, infection, or lack of mobility which leads to starvation. Pine had deep lacerations around his neck from where the net had cut in, but under SRI’s care his wounds healed and he was fit and healthy enough to be released just two months later. Although he will bare visible scars for the rest of his life, Pine was extremely lucky.

It is estimated that over 100,000 marine mammals die every year from entanglements, most often out at sea where the public doesn’t see it. Seals are a great bio-indicator of the environment, as they spend most of their life at sea but also come upon land providing us with valuable insight to the state of the ocean and threats all marine life is facing.

Q4. Do you rehabilitate more grey or common seals?

M: SRI rescues and rehabilitates more Grey than Common seals. Despite the name, ‘Common’ seals are less common in Ireland as their numbers are low. It is estimated to only be about 1,000-3,000 individuals in Irish waters with numbers declining, making them a species of special concern here. There have been a number of disease outbreaks in the past decades that have decimated their numbers, and with the variety of anthropogenic threats they face alongside other marine life, it has been difficult for their numbers to recover.

There are currently more Grey Seals in Ireland than Common Seals with an estimated population of about 12,000 individuals. Grey seal numbers were decimated in the early 1900s due to hunting, but their numbers have slowly started to recover due to the establishment of the 1976 Wildlife Act protecting both species. Currently, there are fewer Grey Seals in the world than African Elephants, therefore Ireland’s population, although stable, is significant in terms of the global numbers.

Q5. What is a typical workday like at Seal Rescue Ireland?

M: There is no such thing as a ‘typical’ day at SRI. Depending on the time of year the kennels and pools could be packed with seals, or relatively slow. Likewise, the number of visitors to our centre fluctuate with the season. We often have seal releases which involve doing a final check of the seals and packing them up in crates to transport them to their release site where we are often joined by large crowds of supporters who are eager to see the seals re-join the wild.

If there are seals reported to our 24-hour rescue hotline on a given day, it may take all day to coordinate our network of rescue volunteers to safely transport the seal to our centre from across the country, or if it’s close by, we may jump in the rescue van and go rescue the seal ourselves. We have ongoing additional activities such as educational presentations at schools, beach cleans, tree planting events, information tables at markets and festivals, as well as training and networking events to spread our message of marine conservation far and wide.

SRI has a large team of short term interns that are in various levels of training for marine mammal care, preparing feeds, maintaining medical charts, administering medical care and medications, and lots and lots of cleaning. We must clean the kennels and baths throughout the day, and monitor temperature, weight gain and behaviours to determine the seals are on the right track toward recovery. As seals must have their feeds spread out throughout the day, there is usually an early morning crew as well as a night crew, and interns are also trained on giving public tours of the facility and promoting awareness about threats seals face and what we can do to mitigate those threats.

If you happen to be visiting Wexford, I would highly recommend you stop by the Seal Rescue Centre. With the opportunity to see some adorable seals up close and the option of a guided tour from a very dedicated team of staff, it’s a place you don’t want to miss!

During the cold, wet, winter of 2020, Seal Rescue Ireland (SRI) teamed up with ‘Plant and Grow for Tomorrow’ and ‘None-so-Hardy Forestry’ to deliver an exciting, new Community Habitat Restoration project. Learn more!