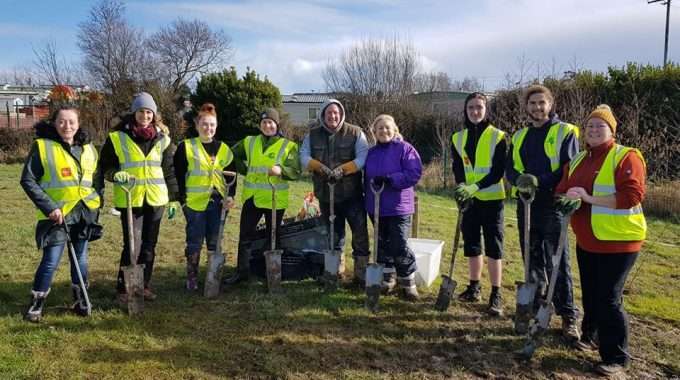 During the cold, wet, winter of 2020, Seal Rescue Ireland (SRI) teamed up with ‘Plant and Grow for Tomorrow’ and ‘None-so-Hardy Forestry’ to deliver an exciting, new Community Habitat Restoration project. Over the course of three weekends in February and March, dozens of volunteers from the local area, bound together with a common goal of restoring riverside habitats by putting shovel to earth to plant the first batch of 1,855 native trees!

Sponsor an area of land to be planted: Packages from €5-300!

Following the overwhelming success of our pilot restoration project in the Courtown woods in 2019, this was the next stage in SRI’s ongoing, proactive conservation efforts. The replanting site, called Glen Aoibhinn, runs parallel to the Aughboy River in Riverchapel, Co. Wexford. This site is the first definitive stage of Seal Rescue Ireland’s larger Watershed Restoration Project which aims to restore the Owenvarragh Catchment Priority Area for Action. The EPA rates the Aughboy River as one of the most polluted waterways in the country and was therefore, the perfect place for our work to begin.

Planting trees = healthy seals. At first glance, you might think that one would have nothing to do with  the other! However, watershed restoration can play a vital role in improving water quality in our oceans, and therefore the marine life within.

All water leads to the sea which means that urban drains and farmland run-off eventually discharge into the sea, along with any pollutants that may have been picked up along the way. Toxins such as pesticides, antibiotics, heavy metals, plastics, and excessive nutrients from fertilizers can enter waterways from the land and impact the associated environment. Many of these toxins can impact the immune systems, behaviour, migration patterns and fertility of many aquatic and marine species1, which have evolved to inhabit environments vastly cleaner than we record today.

We aim to plant a specific and biodiverse arrangement of native plants and trees along waterways and at other strategic sites, using a riparian or wetland restoration model, which creates a natural filtration system, as well as a carbon and nutrient sink. As pollutant-laden water runs off the land, the roots are able to soak up the pollutants, preventing them from impacting the fragile freshwater and marine habitats. Implementing a carefully designed, native, watershed restoration throughout a river catchment, is proven to significantly improve water quality, biodiversity, agricultural nutrient retention, and fisheries; as well as, aid in climate change mitigation efforts2.

Restoring Ireland’s natural habitats and woodlands will play an important role in achieving our targets to mitigate the climate and biodiversity crisis. Based on the simple, yet vastly invaluable process of photosynthesis we can conclude that the more native plants (including seaweeds and sea grasses), the less carbon dioxide in the atmosphere. Which, when combined with industrial decarbonisation, will result in stabilization of atmospheric temperatures and weather patterns. Without global commitment, storms will continue to increase in both frequency and severity. At SRI we are witnessing these effects first hand. Ireland’s native seals are facing an ever increasing challenge of surviving around our wild coasts.

Thriving riparian habitats provide crucial  food and shelter for birds and pollinators, which are fundamental to life on Earth, and in which we can all appreciate the beauty. Carefully designed, riparian restoration will create green and blue wildlife corridors throughout our communities. These corridors increase the biodiversity of flora and fauna in the area, allowing species to migrate between larger habitats, such as wetlands and woodlands. With so much development of housing in past decades, it is crucial to consider the lives of the animals with which we share our space.

SRI’s community planting events not only help restore riverside habitats, but also provide a great platform to build community. It was encouraging to see so many local residents join the SRI team at Glen Aoibhinn, for the first of three planting days we had scheduled in the neighbourhood. Young and old; families, couples and individuals, all with a palpable enthusiasm, joined our team early on Saturday and Sunday mornings to get saplings in the ground. In no more than 15 hours total, we worked together to plant 1,855 native whips.

Among attendees was Imelda Willoughby and her daughter. Imelda is the proprietor of the Taravie Hotel, as well as a committee member of Courtown Tidy Towns and Tourism Promotion Group. She is very active in the community, having supported Seal Rescue Ireland since their early days in Courtown.

“I feel like events like these are so important for all members of our community,” Imelda said. “When the summer season arrives it brings thousands of tourists to Courtown and Riverchapel. It sometimes can be hard to control litter and vandalism. But in recent years we feel when visitors see the hard work local groups have put into the community like planting, painting and general upkeep of areas they are less likely to destroy this work”.

Sponsor an area of land to be planted: Packages from €5-300!

Imelda and her daughter weren’t the only ones who left feeling inspired to do more. Over the next two weekends many inspired faces turned up to help. Plant and Grow For Tomorrow and None-So-Hardy Forestry provided us with a wonderful variety of native trees including Hawthorn, Gray Sallow, Wild Cherry, Hazel, Silver Birch, Alder and Sessile Oak.

Upon arrival all participants received a safety briefing and tree planting demo, before being let loose. Groups partnered off, some members wielding a spade to unearth small patches of soil, while the others placed the trees deep enough to cover the roots, but not so deep as to prevent the younglings from drawing nutrients up from the soil into their branches. The finishing touch was to place a smelly yet vital, handful of nutrient-rich fertilizer around the base of the tree. It was a sight to behold with the community working as a coordinated and extremely efficient team.

“I felt the day of the tree planting project was excellently run,” Imelda expressed. “The moment we arrived we were welcomed and thanked for coming. There was a great sense of community on the day and we really enjoyed the whole experience.”

After a big push on the final day we had successfully planted 1,855 trees in 2,700m2 of land, along the Aughboy River in Riverchapel, surpassing our expectations!

This buffer system will make an increasingly wonderful addition to the community and has begun the important role in cleaning up this glen aoibhinn (delightful river),  and positively impacting the downstream marine ecosystem. As the trees become established and grow, members of the neighbourhood can look on proudly knowing that they had a hand in making this fantastic initiative possible. We’d like to say a special thanks and congratulation to Ken Maguire from the residents committee who received our Restoration Site Champion award, for his enthusiasm,  tireless support and planting efforts.

The Rescue of Maui

THE CALL Our 24-hour hotline phone received a rather distressing call on Thursday afternoon, 10…

A Trip to Seal Rescue Ireland

On a recent trip, I stumbled across Seal Rescue Ireland, a national charity that rescues…