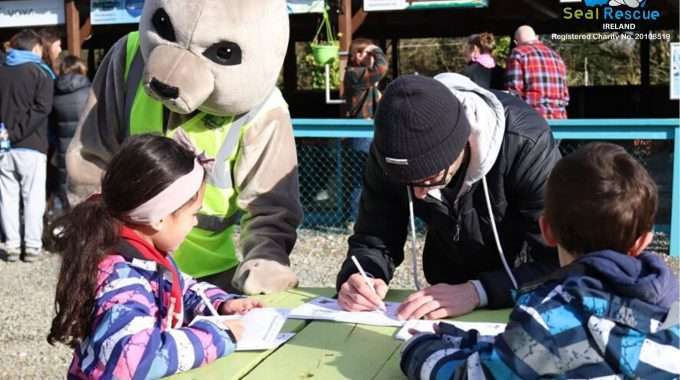 Seal Rescue Ireland took a safari into the depths of the animal kingdom on the first weekend in March, to celebrate World Wildlife Day! We turned our centre into a zoo over two days as we explored not only the lives of our amazing seals, but some of this planet’s other fascinating creatures.

At this family friendly event, kids were able to take part in a discovery trail which was hidden all throughout our indoor and outdoor areas. Each question featured a factoid about some of the coolest animals on Earth. The children also had the opportunity to learn about the ocean’s food web, illustrating how all creatures in the ecosystem are linked to one another and all vital elements for the others’ survival.

In addition to the discovery trail, kids could stop off and get their faces painted with all different ocean creatures, not to mention a few superheroes along the way! Our friendly staff also had some arts and crafts projects for the kids to work on using reused and recycled materials. They could design their own paper plate fishes with colourful scales or learn how to fold an origami “fortune teller” shark.

Even Selkie the Seal, our mascot, made a few appearances, entertaining all the kids and handing out high-fives and hugs. And not to forget our charming rescue pups, the participants also got a close-up look at all the seals currently in our care. Some fan favourites were new admits Cardinal, a tiny month-old pup who had likely been abandoned by his mother, and Honeysuckle, our lovely blue pup whose fur had been dyed by an antiseptic spray to treat a fishing line wound around her neck.

We had a wonderful turn out and it was great to see so many kids engaged and learning, showing such curiosity about the natural world. It was a fantastic fundraiser that all went towards the ongoing rescue and rehabilitation of sick, injured and orphaned seal pups. For an extra contribution, the participants also got to take home a goodie bag full of wildlife-themed treats.

Thanks to everyone who came along and took part, and to the wonderful SRI team who made the event such a success!

SRI During The Pandemic

Why are we seeing more dead seals?

This month, we be were busy raising the alarm about the huge rise in dead seals washing up and being reported across Ireland’s coastlines.

n 2020 SRI recorded a total of 202 dead seal reports, nearly DOUBLE that of 2019! And the trend continues: so far 2021 is starting off strong, with double the numbers reported from this time in 2020