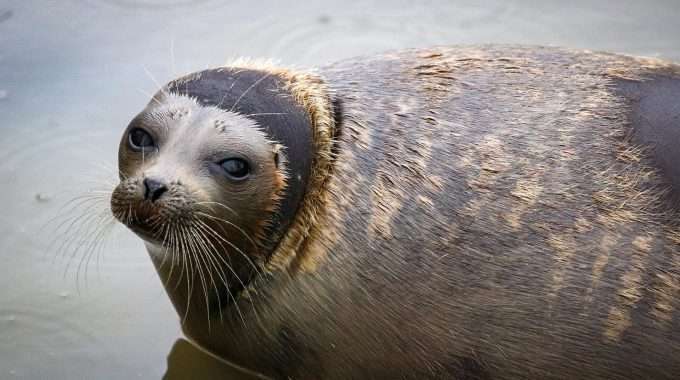 We are thrilled to announce that our rescued Ringed Seal, Cloudberry, at last made her triumphant return to the wild!

This special seal stole our hearts and tickled our funny bones during her 10-week stay at our rescue centre. From slapping her belly and intentionally splashing water at her carers, to chasing the unwitting common seals around the Nursery Pool, it was never a dull moment with this foreign beauty around. As lovely as it was to enjoy the antics of this unique visitor—In the form of a big, round ball of fluff filled with personality—we were so pleased to be able to re-introduce her back into her natural habitat.

When Cloudberry was first discovered, it was an unprecedented sight, and a bit of a mystery as to what brought this Arctic seal to Irish waters. She was an extremely long way from home, and  it was an ongoing deliberation of ours to settle on the most suitable location to release her once she was ready to be returned to life in the wild. We had been working towards securing plans to fly her as far North as possible where she’d have the best chances of survival and encountering others of her own species.

However, an unforeseen roadblock presented itself at the crucial moment—Coronavirus. Due to the rapid and unprecedented developments and subsequent travel restrictions, we had to completely rethink our plans. With all non-essential flights banned for the foreseeable future, flying the little seal up to Scandinavia or Iceland suddenly became utterly impossible. We also investigated a boat journey, but an expedition of that distance would take days upon days, or even weeks. We were reluctant to consider this option as it could have caused unacceptable stress to our little Cloudy.

In the end we had to come to a compromise in order to do what is best for Cloudberry’s welfare. She had hit her ideal release weight, was found to be in fantastic health, and was outcompeting her pool-mates much larger than her. With this knowledge, we couldn’t take the risk of keeping her in care with a looming lockdown that could potentially last months. The risk of a seal becoming too habituated and dependent on humans rises the longer they remain in care, which is the last thing we want for any rescued wild animal.

Most importantly, with Summer approaching and temperatures steadily rising, our fear was that if Cloudberry were forced to stay in Courtown for potentially months longer due to a lockdown,  it could have a detrimental affect on her health. In short, we had to act fast! On Tuesday evening, the 24th of March the decision was made, and the very next day we were on our way to release her off the far north coast of Ireland: Malin Head, Donegal.

As ringed seals are spotted in Scotland and other parts of the UK from time to time, our hope was that releasing her as close to those waters as possible would allow her to navigate her way further North to home waters with ease. It was a very difficult decision for us to make, as our seals’ welfare is always our top priority. The coronavirus crisis threw a wrench in our plans, as it has for people all over the world, so we had to do the best we could under these new circumstances.

Our team woke up early on Wednesday the 25th March to begin the journey to take Cloudberry home. Not knowing what was in store for her, Cloudberry was moved securely to a crate and into our transport van, and our team began the long journey North. For nearly five-hours from Courtown to Northern Donegal, the team kept a close watch on the seal to ensure she wasn’t exhibiting signs of stress or overheating. Even though traveling with all windows down for ventilation, they had to stop twice to put ice in her crate fearing that the temperatures still might be too warm for an animal meant for the Arctic!

At last they reached the farthest Northern point in Ireland, Malid Head, and found the perfect beach to give Cloudberry her first sweet taste of freedom. As they opened the crate door, the little seal made a straight line for the rolling waves with excitement. It can often take our seals a little bit of time reacquainting with the rhythms of the sea before feeling confident to take the big plunge. Cloudy explored the shallows for a while, seeming surprised at first by the cold water, and taking things slow. But it wasn’t long before her instincts kicked in and she paddled further out and finally disappeared under the waves, swimming into the unknown. It was an emotional moment, but beautiful and rewarding to witness.

It’s been an incredible journey watching Cloudberry transform from a poorly little pup to the healthy, chonky and spirited lady that she is now! It has truly been our privilege to play a part in helping this critter to have the best fighting chance back in her natural habitat. We will sure miss her and her hilarious attitude, but we’re just purely delighted that she is now back where she belongs and wish her all the best out there. We just hope the wild is ready for HER!

On the 21st of February 2020 our Executive Director, Melanie Croce, was invited to The Wheel's 20th Anniversary celebration.