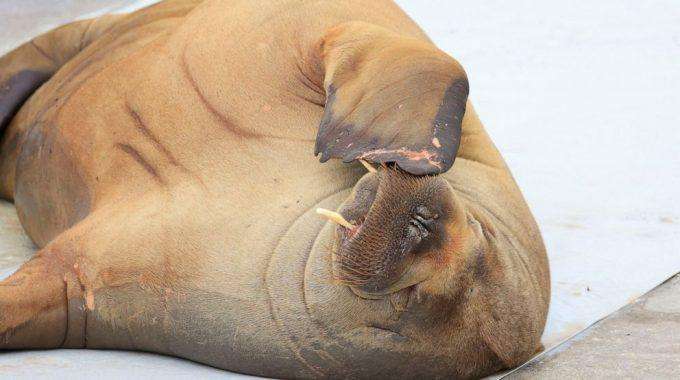 “We are shocked and dismayed by recent news that officials in Norway chose to euthanize Freya, the young female Atlantic walrus, who has been residing outside her normal Arctic range since 2019, most recently near Oslo, Norway. Similarly to our own beloved wandering walrus, Wally, Freya was known for climbing onto boats for a rest, as these warmer waters lack the floating sea ice which would normally serve as the Arctic species’ resting sites.

The decision to put her down was made by the Norwegian Directorate of Fisheries, and was reportedly to prevent potential injuries to members of the public who refused to follow safety guidelines and maintain a safe distance from her. We do not agree with this decision and believe this to be an incredibly unfair outcome for an innocent animal who was already struggling for survival, where irresponsible behaviour of humans was to blame.

Thank you to BDMLR, Cornwall Seal Group Research Trust, and RSPCA Wildlife, for offering us guidance and advice last summer when Wally had returned to Irish waters (after his tour of the UK, Spain and France) when we made efforts to help manage the delicate balance of risks to Wally, humans and property. Through collaboration and dedication, novel ideas emerged such as setting up designated floating platforms for him to rest safely away from humans, and volunteers present on rotating shifts to monitor the walrus and speak to the public about the dangers of disturbance wherever he appeared.

Thank you to everyone who shared our posts asking to give him space to rest, and avoided publicly sharing his real-time location which would draw curious crowds.  Thank you to the amazing community members in Ardmore, Clonakilty and Crook Haven, who worked with us and used their local knowledge to help protect him. Thank you to everyone who helped put public pressure on people to act responsibly around a gigantic wild animal who was lost, confused and far from home.

Wally was lucky. Due to the cumulation of efforts, and everyone who contributed towards his safety and treated him with respect, he was able to get the rest he needed and ultimately made his journey north. Three weeks after vanishing from Ireland, he was spotted in Hofn, Iceland, proving that his compass still worked and he was nearly back to the Arctic circle. It’s devastating that people didn’t learn from this and treat Freya with similar respect; and for that, she has paid the price.

As the impacts of climate change increase each year, Arctic animals are losing their habitat at an alarming rate. Freya will not be the last walrus to venture into new habitat in an effort to survive, and as sea ice continues to be lost, we should expect this to occur more and more frequently. The end which Freya met should not, and can not, be considered a precedent for how these animals should be treated in the future.

Let’s use this lesson as a way to look out for all wildlife, especially our own native pinnipeds who similarly struggle for habitat safely away from human activities. Grey seal pupping season is upon us and reports of newborn white coats are popping up all over Ireland’s coastlines, and they are the most vulnerable to disturbance. Please do not approach seals resting on the beach, and avoid swimming in waters known to have seals.

Watch the video on Facebook.com

Seal Rescue Ireland in Courtown opens again on Monday, June 22, in a new and…

Copyright 2019 - All Rights Reserved - Seal Rescue Ireland - Healthy Seas, Healthy Seals
Back To Top
We use cookies to ensure that we give you an enjoyable experience on our website. The cookies we use grant access to videos, preferences and much more. You can learn more about the cookies we use in our Cookies Notice. Seal of ApprovalNo thanksCookies Notice