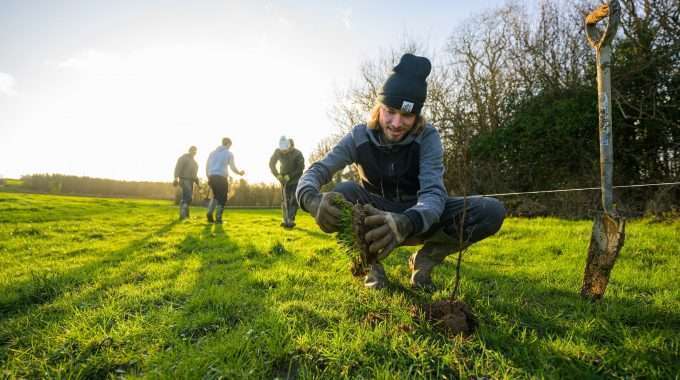 Why is a seal rescue charity planting 25,000 trees? The biodiversity crisis is too urgent not to!

Seal Rescue Ireland has planted 14,000 trees and aims to plant 11,000 more. Melanie Croce,  Executive Director, explains what seals tell us about the state of our environment, and why marine conservation starts on land.

This summer, having celebrated their 12th birthday, the staff at Seal Rescue Ireland (SRI) are reflecting on their role in the global fight against environmental degradation. The organisation is dedicated to the rescue, rehab and release of sick and injured seals across Ireland. But boasting the largest social media following of any charity in the country means Executive Director, Melanie Croce, feels her organisation bears extra responsibility to turn the tide on biodiversity loss. “We don’t have much time now before the point of no return,” she says.

“We were originally established in Dingle, as a seal rescue and rehab centre,” says Croce. “But there’s really no point in rescuing seals, only to send them back out to dangerous, polluted habitats.”

Her words point to a long history of environmental destruction in Ireland. The oyster reefs which used to line the Irish Sea coastline crashed more than a century ago due to over-fishing,  leaving sandy beaches exposed to erosion. Native woodlands once covered 80% of the island nation, but only 2% of those forests now remain. “Ireland has been heavily exploited for such a long period of time that there has been a baseline shift where we don’t have a grasp of what biodiversity could have been,” says Croce.

But there was one indicator of biodiversity loss that could not be ignored. Both of Ireland’s two species of seals, Greys and Commons, almost went extinct in the 1900s. A 1979 survey put the Grey seal population at less than 300 individuals. The vanishing seals are a heavy loss to both the nation’s cultural identity and its environmental health.

“Apex predators like seals have an extremely large impact on the environment around them,”  explains Melanie Croce. “They prey upon fish and crustaceans, keeping those populations in balance. And if seals are sick – many rescue animals we see have immune systems weakened by pollution and stress – there is a good chance that other animals sharing the same waters and food supplies are being harmed as well.”

She is quick to emphasise that some of those other animals are us.

“It is bleak,” admits Croce. “But we don’t want people to feel hopeless.” That’s where planting trees comes in.

“What we do on land affects the oceans,” Croce says. “Seals swim in the same waters that we swim in. They eat the same seafood we eat. We are not separate from nature.”

The story the team at SRI is telling is one of interconnectedness. Ecosystems are networks in which plants, wildlife and people all have roles. This means that countering environmental threats on land not only benefits seals at the coast, it also protects other species in the food chain. Seal Rescue Ireland’s association with reforestation is symbolic of the connections between land and ocean, people and animals.

“We’re focusing on planting trees along waterways and coastlines, to maximise ecosystem services,” Croce explains. “It’s called a riparian buffer. The buffer [of vegetation] protects the rivers from pollutants and erosion.”

“And at the same time, we’re fighting climate change because as trees grow, they absorb and store away carbon. There is a  cascade of positive impacts.”

Seal Rescue Ireland is now more than halfway towards its goal of planting 25,000 native Irish trees. To Croce’s knowledge, they are the only seal rescue centre in the world that is also planting trees. That sets the organisation apart. Bringing together seemingly disconnected causes under one umbrella of environmental protection has brought the charity admiration not just within Ireland,  but around the world.

“We collaborate internationally,” says Melanie Croce. “The UK, US, Australia, New Zealand, Greece,  South Africa… These same problems are happening all over the globe. If we’ve learnt something  useful, we want to share it.”

Q: What species of seals do we have in Ireland? A: While there are 33…

Bats play a valuable role in functioning ecosystems. Across the globe, some bat species are…